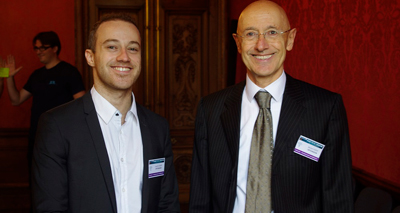 Who has never wanted to pause before paying for their online purchase? This behaviour is increasingly widespread among consumers and studies show it: if the customer hesitates, there is a good chance that in the end he will not buy, whereas if he is allowed to put an option on his purchase, he will validate it in most cases.

With this in mind, Laurent et Michel Sidier have developed Optionizr, a programming interface that allows merchant sites to sell options on their products and services. In one click for the buyer, no more fear of seeing the price of the ticket fly away in three hours or buying five concert tickets at the risk of going there alone, due to the lack of availability of his friends: with Optionizr, the option is blocked. And for the seller, the probability of transforming the multiplied sale!

Created in 2015, Optionizr immediately received the Grand Prix de l'Innovation from the City of Paris and quickly won over many customers: many airlines, such as Aigle Azur, Corsair, Air Caraïbes, Air Tahiti Nui, but also the Stade de France, the Théâtre du Châtelet, Thalys... Its development is now very consolidated in France and according to Laurent Sidier, co-founder "this can take us quite far: we already have contacts in South Africa, Kuwait and Optionizr is attracting great interest in Asia. »

A nice career path for this start-up, which likes to remind us that if airlines were a little used to this system of options in 2015, it was necessary to create the market with the entertainment and hotel sector, which saw it as a profound change in culture.

However, the advantage for the merchant is threefold: first of all Optionizr allows him to increase his sales, because by taking an option the customer is a little more committed. Then, the sometimes paying option (between 1 and 20€ in general according to the sum of the basket) allows him to increase his earnings. Finally, it is an additional service that it offers to its customer and a comfort of purchase, a major axis to drive consumers on its site.